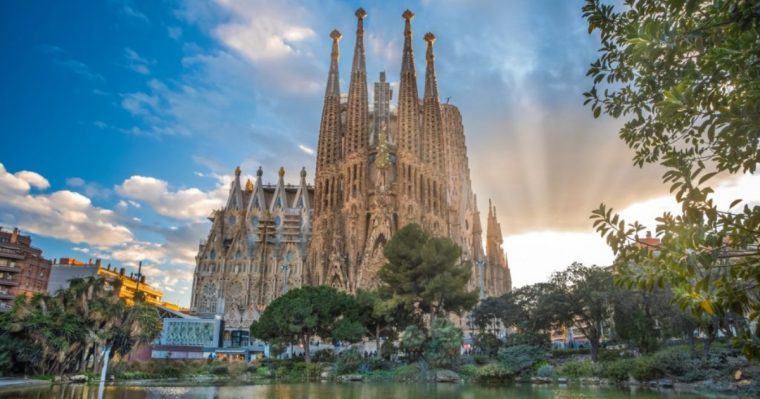 Temple of the Sagrada Família by Gaudí

One of the most notable monuments in Barcelona and around the world is the Basilíca i Temple Expiatori de la Sagrada Família (Expiatory Temple of the Holy Family), designed by the famous architect Antoni Gaudí. If you plan to visit Barcelona, the Sagrada Família Temple should be at the top of your list of things to see and visit.

It is Barcelona’s pride jewel and one of the most popular monuments in the entire world, visited by millions of tourists every year, a uncommon and distinctive temple, for its origins, foundation and purpose. 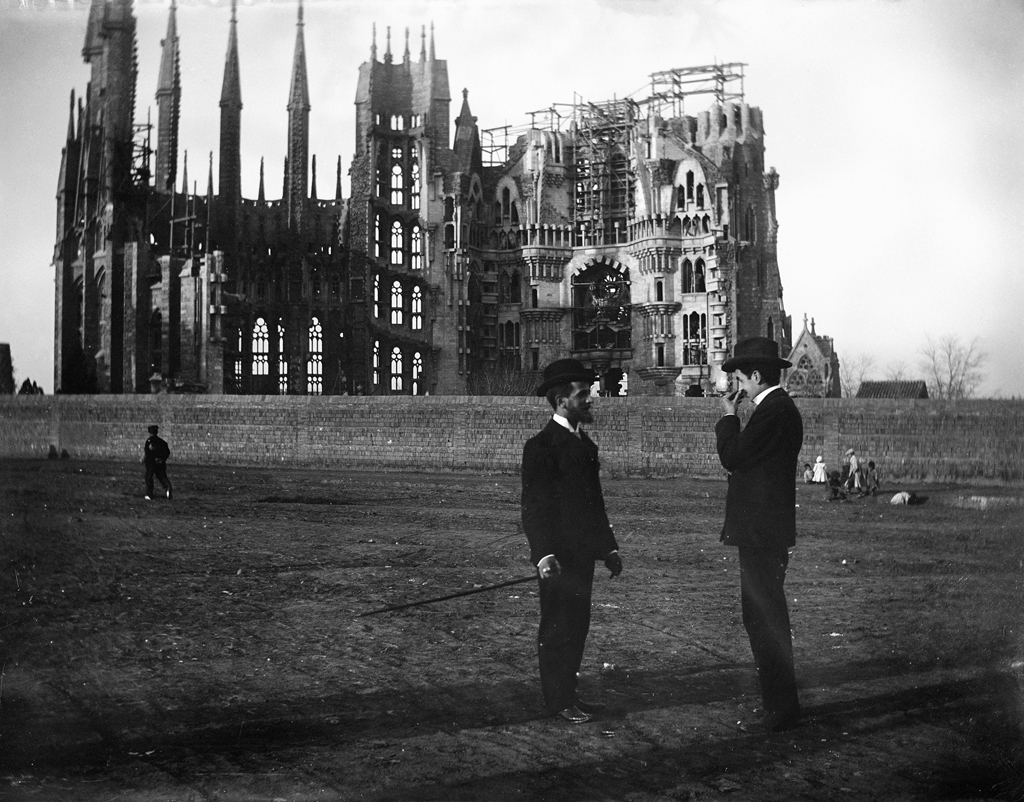 Construction began on 19th March 1882, on the feast of Saint Joseph, when the cornerstone of the temple was laid. Originally the Foundation hired Francisco de Paula del Villar y Lozano, the Temple’s first architect who planned on creating a temple in the Neo-Gothic style. After one year, due to disagreements between the architect and Foundation, the position was offered to Antoni Gaudí. After taking over the project in 1883, first Gaudí built the crypt Maria do Carmo, started by the first architect, which was completed in 1889, then started construction of the apse building. After receiving a significant anonymous donation, Gaudí considered a new and greater design – he proposed a revolutionary design that was more monumental and innovational in its shapes, structures and building techniques.

The money for the construction, which costs around 25 million euros annually, is obtained by the many visits to this Temple and various donations. Gaudí wanted to express Christianity through architecture and communicate the message of Jesus and his Evangelists. He obtained an extraordinary symbiosis between form and Christian characterisation, with a new and unique architecture developed by logical structures, forms and geometries inspired by nature and geometry, with light and colours also playing an important role.

According with the Association of the Devotees of Saint Joseph “the meaning of the Sagrada Familia is communicated through the form and expressivity of its architecture and the iconography of its sculpture.“ 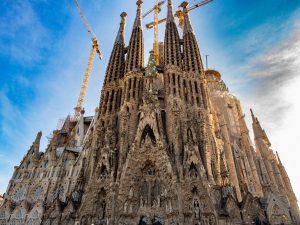 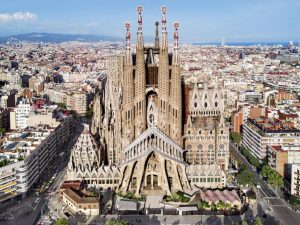 Gaudí started construction of the façades with the Nativity façade, the façade expressing the joy of the Birth, in order to attract donations for the works, he worked on this façade until the day of his death, in 1926.  The Nativity Façade work was interrupted by the Spanish Civil War in 1936. The construction of Passion façade started once was completed Nativity façade, in 1954, after 64 years the Passion façade was totally finished, in 2018.

The works of the Glory Façade, which is expected to resume in 2020, will not start from scratch. Nowadays, 8% of the structure is already built, such as the foundations and walls of the lower part of the tower where the roofs are located. For the architectural development of this façade, located in the street of Mallorca and where the main entrance of the Basilica will be located, the guidelines left by Gaudí and his disciples will be followed – fragments and archive photos of the original model developed by Gaudí and the information that Gaudí’s disciples left. 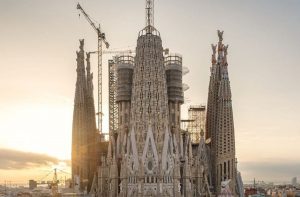 The various architectural elements are endued with Christian symbolism. Each of its 18 towers has a special meaning. In the middle is the tower dedicated to Jesus Christ and around it are four towers representing the Gospels; the books containing the life and teachings of Jesus. The tower above the apse, crowned by a star, represents the Virgin Mary, while the remaining 12 towers represent the 12 Apostles, four in each façade. The Apostles towers will be also the bell towers, four of which will be on the Glory façade, yet to be built.

These 18 towers will provide a sense of elevation to the central tower dedicated to Jesus Christ, which will be the highest point of the temple – when finished, it will be 172.5 metres tall. Gaudí established 172.5m high because he considered it should be less than what we considered to be the work of God – the Montjuïc mountain, with 173m high, which is also the city’s highest point. 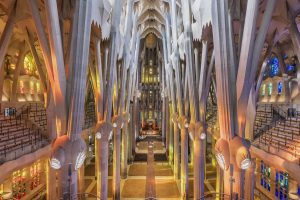 A structural function which reflects the idea of Gaudí that the inside of the temple should be like a forest, inviting prayer to connect with God and divine worlds.

Antoni Gaudí made the exterior facades of the Temple adorned with several details, sculptures, with a clear catechetical and evangelizing function. But with the interior he wanted to be a space for reflection and prayer, and that is why we only find  four sculptures inside the temple, which marks the four ends of the cross that draws the plan of the Basilica. When crossing the transept from the door of the Birth towards the Passion door, we can see the three figures that represent the three members of the Sagrada Familia: Jesus, Maria and Joseph.
The interior columns are inclined like trees. The result is extraordinary, the pillars and arches supported by the columns transform the interior of the temple into a stone forest of palm trees, lots of light streaming in through large windows and the vault. To lessen the load of the roofing and bring light into the building Gaudí designed skylights in between the columns, based on quadric surfaces, built using pieces of golden and green glass and tiles to reflect daylight inside. All the stained glass in the apse follows a plan of gradual tones to create an atmosphere appropriate for introspection. 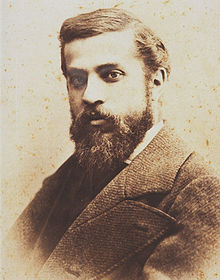 Discussing the history of the Temple Sagrada Família would not be complete without speaking about the principal architect of the Temple – Antoni Gaudí, whom has been recognized internationally as one of the greatest exponents of modernism. A genius with a unique, personal and incomparable architectural language based on organic and anarchic geometric forms of nature.

Antoni Gaudí i Cornet was born on June 25, 1852 in Reus, Catalonia. He came from a family of coppersmiths, a fact that allowed the young Antoni Gaudí to acquire abilities to treat space and volume while helping his father and grandfather in the family workshop. Showing an early interest in architecture, Antoni Gaudí went to Barcelona in 1869/70 and entered the Provincial School of Architecture in 1873. His studies were interrupted by military service and he graduated in 1878.

Another must see buildings from Gaudí in Barcelona are: 1) Casa Milá (La Pedrera); 2) Casa Batlló; 3) Parc Guëll; 4) Casa Vicens; 5) Palau Guëll; and 6) Gaudí Crypt in Colonia Güell. These buildings, including also Gaudí’s work on the Nativity façade and Crypt of La Sagrada Familia, are classified as World Heritage by UNESCO and testify Gaudí’s extraordinary contribution to the development of architecture.

Gaudí, since 1883, dedicated 44 years to the Sagrada Família project. Since 1914, Gaudí devoted his time exclusively to the Temple until the day of his death. He was a spiritual person with his own religious metaphysical view, for many Gaudí is considered “God’s Architect”. Gaudí passed away in 1926, leaving his most important project, unfinished. He was buried on June 12 in the a crypt in the Sagrada Família Temple. Thanks to his architectural plans, his work continues by the responsibility of renowned architects.