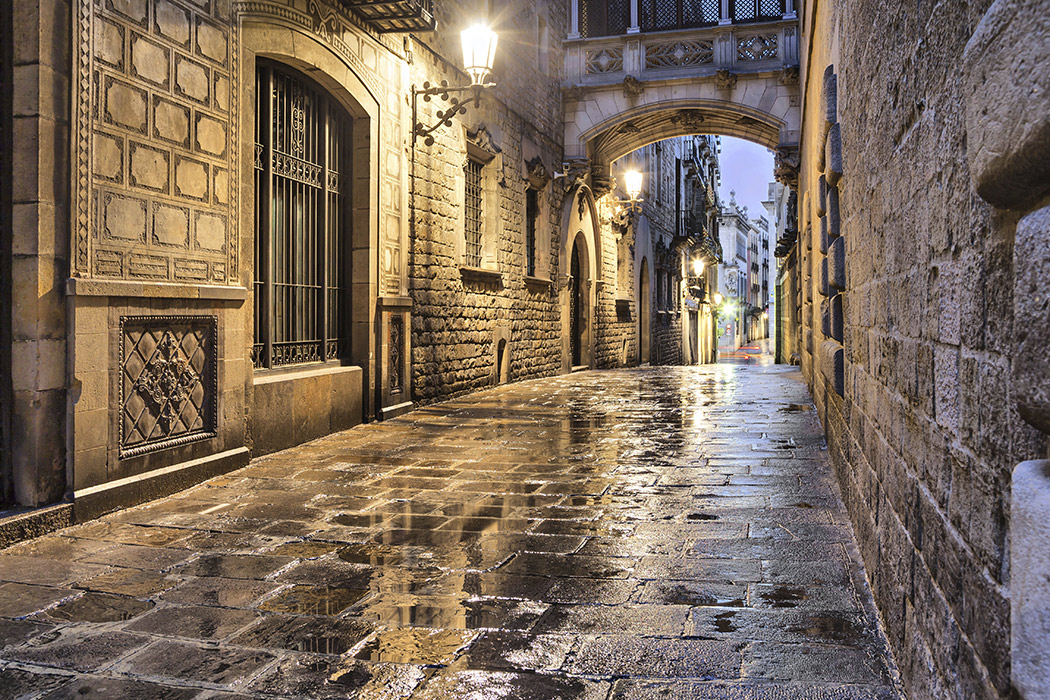 The Gothic quarter, or Barri Gòtic in Catalan, is  the centre of the Old Town of Barcelona and is the city’s oldest quarter.

Its history dates back to the Romans, when was built the Roman Colony Barcino, during the late 1st century BC. Over the 13th and 14th century Bachinona (as the city was called at the time) became the main residence of the court of the Crown of Aragon. Then city experienced an impressive growth, transforming into one of the most important political capitals. Here, in the Gothic Quarter, we find  the City Hall and the seat of the Catalan Government – the Palau de la Generalitat, the Cathedral of Barcelona and many other historical places to visit. The name “Barri Gòtic” was given in 1911, to unify the Gothic architectural style of the area.

Today the Barri Gòtic features a fusion of buildings dating from Roman times to the 21st century. Walking through its narrow streets will lead you into a medieval atmosphere, defined by several small squares, churches, gothic constructions and streets filled with trendy bars, clubs and restaurants. More than an historical area, this neighbourhood presents also a vibrant and creative modern culture, with several artisan shops, street markets and restaurants offering authentic culinary experiences.

In this post we present a selection of important landmarks and places to visit at the Barri Gòtic, without undervaluing other points of interest that should be included also but, honestly, if we would speak about all of them, the list would be endless, regarding its priceless historical heritage. A place of singular beauty and authenticity. 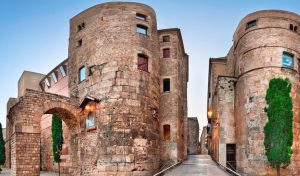 Barcelona’s history began where is today the Gothic quarter, when the Romans built the walled colony named Barcino. This Roman town was founded in the late 1st century BC by the Emperor Augustus, the first emperor of the Roman Empire, reigning from 27 BC until his death in AD 14.

Although Barcelona’s first city wall dates from the 1st century BC, wall was reinforced during the early 4th century AD. Barcelona’s Roman ruins are found everywhere in the older sections of the city, in Plaça dels Traginers is the Roman wall defence towers, at Plaça Nova you face to face with the gateway of Barcino and at Plaça Ramón Berenguer can be seen some remains of the Roman walls. If you look closely, you’ll see that the wall was erected with building materials retrieved from ancient constructions.

The wall of Barcelona originally had 74 towers, was 16 metres high and marked the perimeter of Barcino city, which was 1.3 kilometres in circumference. 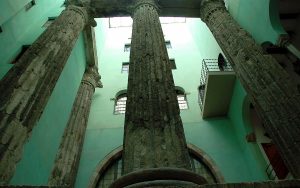 As you explore Barcelona’s Gothic Quarter you’ll discover one of the city’s oldest monuments, on Carrer Paradís. Inside a small medieval courtyard, the 2,000-year-old four columns from the Roman Temple of Augustus have survived along the centuries.

The Cathedral of Barcelona 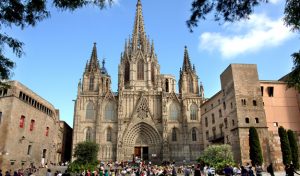 The Catedral de la Santa Creu I Santa Eulalia, also known as La Seu and Cathedral of Barcelona, was built over six centuries, marked by three distinct periods of construction. With history dating back centuries, the site of the Cathedral has gone through many changes.

It was given to this Cathedral the name Santa Eulalia, one of the city’s patron saints, due to the legend of a girl with 13 years old, Eulalia, who refused to deny and died for her faith in Christian beliefs, during the Roman Empire in the 4th century.

The first building works started in 1298, the Neo-Gothic Cathedral was built on the foundations of a 4th-century early-Christian church, and on the foundations of a Romanesque church built over the 10th century. The Cloister was finished in 1448 and the main façade and bell tower were completed in 1890, in the neo-Gothic style. The present main façade and towers were only built during the early 20th century, respecting the 15th century architecture plan.

At Plaça Del Rei (the king’s square) is the historical location of Barcelona’s counts and the Crown of Aragon. The Palau Reial Major dates back to the 11th century and building was rebuilt on Gothic style, however we may still see a mix of architectural styles, including Visigothic and Romanesque details.

The Royal Palace, also called the Palau Reial Major, and its surrounding buildings are the best examples of the city’s medieval past, of the splendour lived by the city from 13th to 15th century. This Royal Palace is famous historically as the place where King Ferdinand and Queen Isabella welcomed Christopher Columbus in 1493, after discovering America. 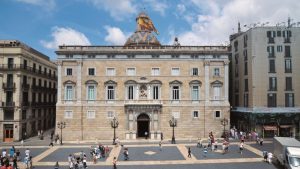 The Plaça Sant Jaume (also known as Plaça de la Generalitat) has been the city’s political centre almost since its origins. With 2,000 years of history behind it, is now the site of the City Hall (on the southern side) and the Palau de la Generalitat, seat of the Presidency and the Catalan Government (on the northern side).

The current appearance of the Plaça Sant Jaume dates from 1823, throughout its history, this square has been the venue for several historical and cultural events that include Barcelona’s traditional festivals, political demonstrations, art exhibitions and celebrations of football victories. The present square name memorises the old and previous church of Sant Jaume, which was located where is today the City Hall façade.

The Church of Sants Just i Pastor 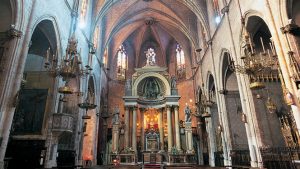 The Church Sant Just i Pastor is ​​a single-nave church hidden between the oldest streets in the Gothic quarter,  considered to be the oldest church in Barcelona. Archaeological studies have allowed to identify the origin of a Christian church built over the 4th century, and that even before that it was a place of pagan worship.

The current Gothic structure was built around 1342. Its architecture and artefacts represents pagan and Christian mythologies mixed up.  One of its most famous relics is the sculpture “La Moreneta” – the Black Madonna, it coincides with the exact design from the Black Virgin from Montserrat. La Moreneta is the patron saint of Catalonia, and is also believed by some to be based on an ancient source, the Egyptian goddess Isis.

Outside in the square there is a famous landmark – the Fivaller fountain, also know has the Font Sant Just, which is also Gothic in style, decorated with three bas-reliefs of the faces of people.

The Ancient Synagogue and El Call – the Jewish Quarter in Barcelona 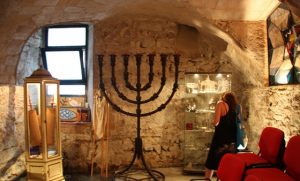 The Synagogue of Barcelona is considered to be one of the oldest in Europe, believed to have been built around the 4th century. Inside the foyer of the Synagogue we may see an example of the Opus africanus, an ancient technique of wall construction with ashlars, built over the first centuries of the city’s foundation.

The Synagogue is located where was once the Jewish quarter, also called “El Call” and “Judiaria”, at the centre of the Gothic Quarter. Over the 13th century, the Call population had grown so another area was built – named Call Menor, where is now the Church of Sant Jaume. Up to 14th century Barcelona Jewish community had around 4,000 people, they lived according with their own customs and laws, and quarter had several services including bath houses, hospitals, schools and 2 synagogues.

During 14th century Spanish Inquisition expelled the Jews from the city and the Jewish culture and buildings were hidden or wiped out, including the Major Synagogue, officially rediscovered in 1996. 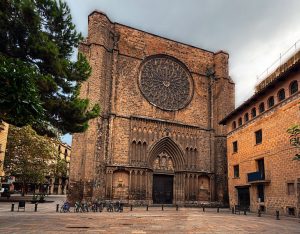 The Basilica of Santa Maria del Pi was built over 14th century, in the Gothic architecture. A Romanesque church from 5th century stood here until the current basilica was built.

Basílica houses the remains of members of Barcelona’s nobility and Barcelona saints. Also holds an archive with a great volume of documentation, result of the more than a thousand years of existence of the parish, the first records date back to the 11th century.

Inside the church you may visit the museum which presents an important collection of silver and gold work and the permanent historical exhibition. The crypt, the garden and the bell tower, are also accessible. The church has one of the world’s largest rose windows and is one of the most important landmarks of city’s religious heritage.

The Plaça del Pi, right next to the church, hosts a weekend art market. If you are a lover of painting, you must visit this place, you will find great paintings at affordable prices. 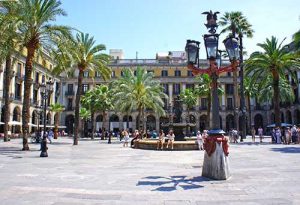 Plaça Reial  is the Barcelona’s royal square. Was built in late 18th century on the remains of the Santa Madrona Capuchin monastery, which was demolished around 1835. At this period many of Barcelona’s religious buildings disappeared as a result of the confiscation of properties.

In its center stands the Font de les Tres Gràcies (fountain of the Three Graces). The first public works attributed to the architect Antoni Gaudí are located around the fountain – two ornamental street lamps, one on each side of the fountain.

Today this square is one of Barcelona’s most popular nightspots, with great bares and restaurants. 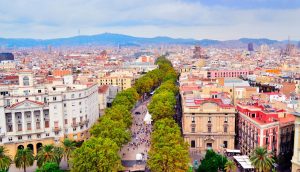 Referred both as La Rambla and Las Ramblas, was originally a water channel and marked out Barcelona’s medieval walls. In the late 18th century it became the city’s most famous boulevard, with a Parisienne atmosphere created by the outdoor cafes, flower shops, street artists and street-lining trees. A 1.2km long boulevard, between Barri Gòtic and El Raval, and connecting Plaça de Catalunya with the Christopher Columbus Monument at Port Vell.

La Rambla is a window into Catalan culture, filled with shops, cafes, historical sites, museums and theatres.  As you walk along, you’ll see one of the most important landmarks related to La Rambla beginning – La Boqueria Market, its origin dates back to the 13th century, go inside and get a bite, there`s more than 300 stalls offering great food.  If you love the Modern Art, Contemporary art exhibitions are presented at the Palau de la Virreina and the Centre d’Art Santa Mònica.